Iceland – Father and sons with the same interest 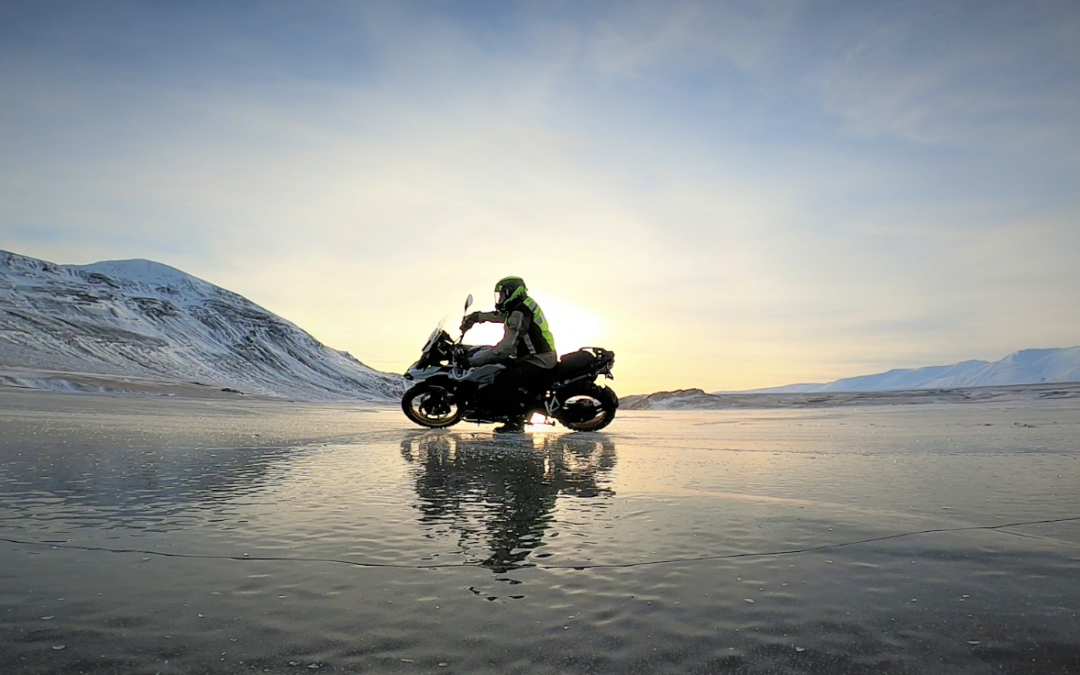 Iceland – Father and sons with the same interest, riding a motorcycle on ice! Let’s be “Inspired by Iceland”

Let’s be «Inspired by Iceland». Motorbikes. Ice. Driving. Salmon fishing rivers. Here is Iceland’s famous motorbike guide and driver, Hjörtur L. Jonsons, story about icebike driving! You can take part of the tour by watching the YouTube video in this article.

Let’s be «Inspire by Iceland!»
During the winter, there is little motorcycle riding in Iceland except for those who own motorcycles that are equipped for ice riding, but those who do not have these bikes are often diligent to go to various entertainments for motorcyclists and have regular meetings for motorcyclists, says Iceland’s famous motorbike guide and driver Hjörtur L. Jónsson.

COVID-19 makes family ok
This winter has been difficult for many as it is not allowed to meet in groups while Covid-19 is attacking the rest of the world and Iceland. However, families can be together and have fun without being in a crowd outside of other family members. It is good that both father and sons have the same interest in having fun on motorcycles (father, Hjörtur 61, sons Sveinn 30 and Ólafur 23). 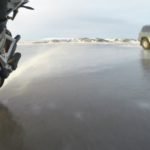 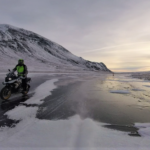 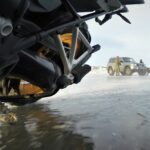 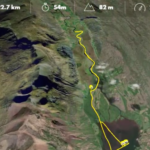 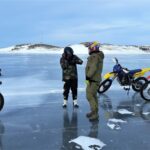 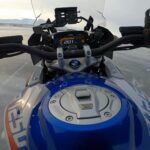 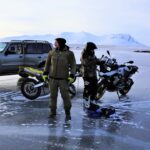 On three motorcycles on ice tires 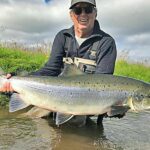 Rock & roll legend. World-class guitarist Eric Clapton, one of the greatest musicians of all time at this river. Photo: Vatnsdalsa.is 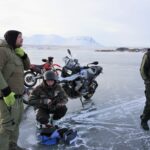 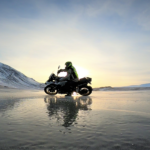 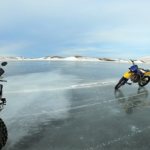 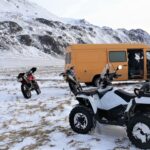 At the beginning of February, there had been freezing weather all over Iceland and ice on all the lakes, and even some of the salmon fishing rivers were so frozen that it was possible to drive them on cars and motorcycles.

We loaded the motorcycles in the Mercedes van to drive on a salmon fishing river.

Vatnsdalsá – Famous salmon fising river in Iceland
We had heard that one of the most famous salmon fishing rivers in Iceland, Vatnsdalsá, was so frozen that it was possible to drive cars and trucks on it and we contacted a farmer who lives by the salmon river and knows it well. The farmer said that he had both driven his truck and rode a horse along the salmon fishing river and it was definitely not a problem to ride a motorcycle on the ice, said Jón Gíslason from Hof Guesthouse in Vatnsdalur.

When we got there in the van with the motorcycles in the back, the farmer was waiting for us and offered us a ride in his truck to show us where it was safe to drive. After the car ride, there was nothing to do but put on the motorcycle clothes and attach the GoPro cameras to the bikes, the weather was good, sun and almost no wind but – 2 to – 5 degrees frost.

On three motorcycles on ice tires
Our motorcycles are Husqvarna TE 450 and GasGas 200 on Trelliborg ice tires. Then there is the third motorcycle, the BMW 1250GS, on home-made spiked tires made from wood screws that are screwed inside and out.

The front tire has 378 spikes and the rear tire has 448 that stand 7-9 mm. out of the tires, but these tires were tested in December and proved to grip the ice well.

We started driving down the river to a large lake in the middle of it and played on the bikes. We recorded a lot of videos of each other’s riding, but the older son Sveinn is a trained actor and has come close to filmmaking. He took control of the GoPro cameras and recorded footage of his brother and father, the two took turns in a competition finding out which was the crazyer one by driving at different speeds on the ice which Ólafur won by seeing over 200kph on the speedo confirming he is the crazyest family member.

Drive over the most famous salmon fishing spots on ice
Then we ended the day by driving up the salmon fishing river about ten kilometers, on that way are all the most famous fishing spots on the salmon river where fishing is up to 110 cm. salmon. After riding each motorcycle about 40 km. on the ice it was time to stop. We put the motorcycles in the van and went for coffee and soup at the guesthouse at Hof in Vatnsdalur, where our farmer friend runs a guesthouse, a horse farm and has over 600 sheep. We were happy when we returned to Reykjavík after a fun day on the motorcycles.